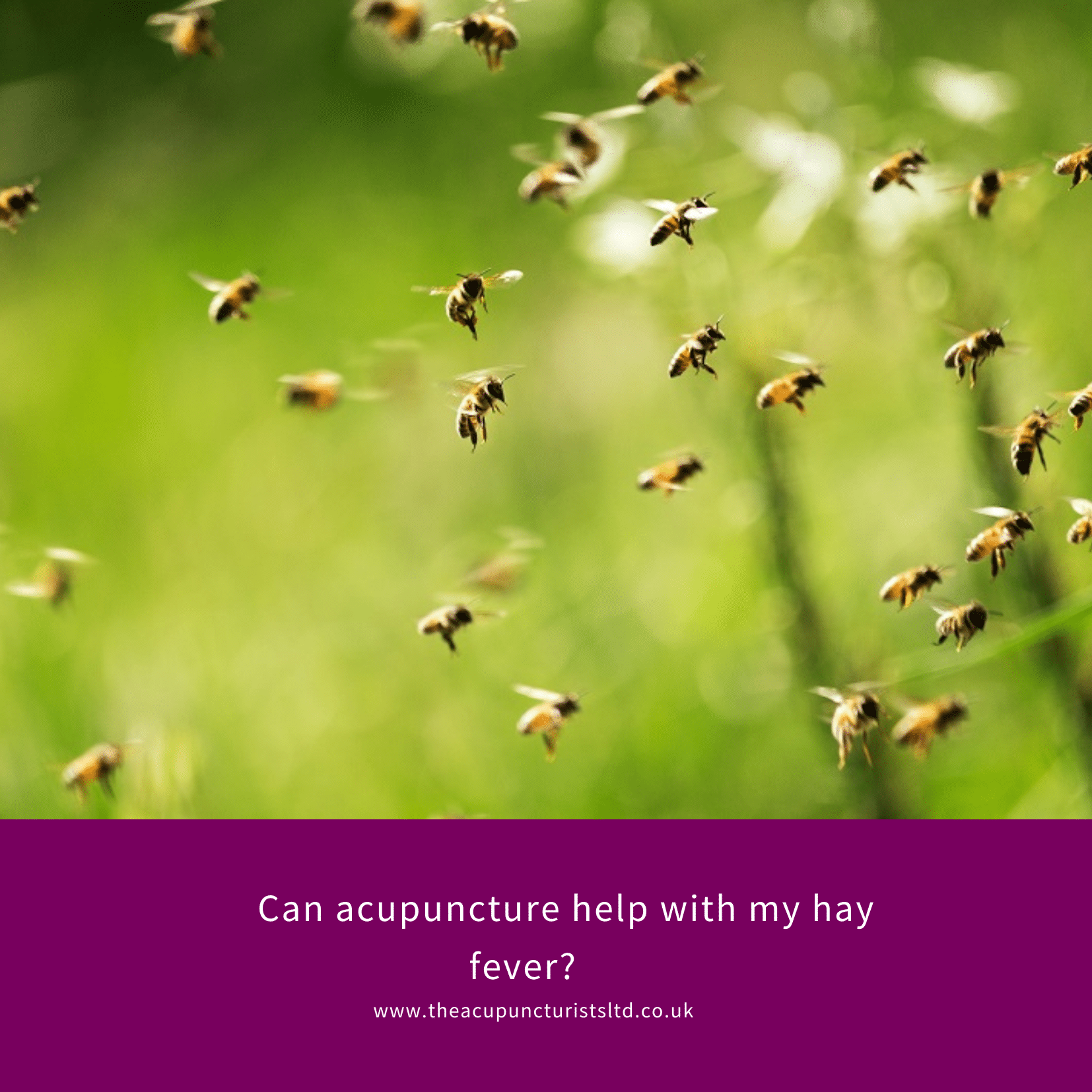 Can acupuncture help my hay fever?

As the warmer temperatures return, and our thoughts turn to summer, there are thousands of people who are dreading the return of hay fever season and the miserable symptoms the condition brings.

I’m often asked how acupuncture can help to mitigate and reduce (and sometimes even eradicate) the itchy eyes, runny noses and endless sneezing that is often Mother Nature’s calling card as she begins the annual business of renewal.

To understand how acupuncture for hay fever is effective, it’s useful to understand the biological changes that you are experiencing when hay fever strikes.

Ultimately, hay fever is an allergic reaction to pollen. Some people are allergic to only certain types of pollen – e.g., grass seed pollen, which is among the most common while others have extreme sensitivity and are intolerant of all pollen types.

Over the last few decades, the number of people who are affected by allergies has grown. This is partly down to the physical and temporal changes in our environment, but also due to improved clinical immunity.

This immunity is good in one way – it means we are less likely to suffer with conditions that were once considered widespread and common, such as ‘flu.

But it has its downsides, too, because in improving immunity through clinical interventions, we are narrowing the opportunities our bodies have to develop natural immunity (which is usually longer lasting).

But while new allergies are always emerging, hay fever has been with us for a long time and though off-the-shelf remedies, such as antihistamines, can help to mask symptoms, the condition has been the scourge of thousands of people all their lives.

Acupuncture is an excellent option for those looking for a solution to manage symptoms that can be hugely debilitating and are often highly unpleasant.

As I write, we are about to enter the key period of the year for hay fever to strike. Although, strictly speaking, hay fever can be problematic from February, when the first signs of spring begin to appear, May and June are the months when the majority of people begin to experience symptoms.

Acupuncture is good for treating the symptoms that might already be present. However, its true benefit is felt when hay fever sufferers take early action to build up resistance to their allergy.

In other words, now is the time to try acupuncture for hay fever if you’re looking for a solution beyond your local pharmacy’s shelves.

What are the symptoms that acupuncture can help to manage?

The symptoms the majority of people experience when hay fever strikes are known collectively as Bi Qui in traditional Chinese medicine (TCM) and include:

You may also experience fatigue (more than half of hay fever patients do) and find it difficult to get to sleep or enjoy uninterrupted sleep.

How does acupuncture for hay fever work

Before we deal with how acupuncture works, let’s deal with how hay fever works. In essence, once the allergen enters your system (usually through inhalation of pollen) your immune system immediately gets to work producing a chemical called histamine to fight it.

It is this chemical that produces the uncomfortable symptoms of hay fever.

To combat this, most doctors will either prescribe prescription-strength doses of antihistamine (for severe hay fever) or, in milder cases, recommend you buy a weaker-strength branded antihistamine treatment from your pharmacy.

While any medication you take can help to alleviate the symptoms you’re experiencing, it may also contribute to fatigue or sleeplessness – so taking anti-histamine often becomes a double-edged sword trade-off of some symptoms in return for other, possibly less intrusive symptoms.

Either way, medicating against hay fever is not always a win-win solution.

Studies and research papers over the last 10 to 20 years have shown that acupuncture can be effective in the treatment of allergic rhinitis (the formal name for hay fever and other allergies) not only in reducing or managing symptoms, but also in strengthening the immune system.

In Chinese medicine, conditions are generally linked to the health of specific organs, and TCM links allergic rhinitis to the lung, and also to the spleen and the kidney, and this makes sense given a primary ‘victim’ of hay fever is reduced lung capacity.

If you follow my blogs regularly, you’ll know that acupuncture uses superfine needles to painlessly remove blockages to our natural healing energy, which in TCM is called qi (chee), to restore balance and harmony to the body.

By restoring the flow and purity of this energy, acupuncture is believed by both modern and ancient medicine to be effective in improving natural immunity, inhibiting the release of histamine in response to allergens, and reducing inflammation.

There are different types of acupuncture which can be used in the treatment of hay fever symptoms – body acupuncture, cupping, ear acupuncture and tian jiu (cold moxibustion therapy) are four common treatments – depending on the severity and nature of the allergy.

How often should I have acupuncture for hay fever?

Perhaps predictably, the answer to that question is that it depends on the individual and the severity of the condition, but as a rule of thumb two or three treatments taken close together are often enough to see a significant improvement in symptoms.

However, in severe cases it may be that a patient will benefit from treatment once every one to three weeks or so until the end of the season to really stay on top of things.

Build up to stay fit

Just as one glass of orange juice when you develop a runny nose isn’t enough to stave off a cold, so one acupuncture treatment when you feel the first signs of itchiness around your eyes won’t be enough on its own to make a big difference to the severity of the symptoms.

By getting a head start on hay fever and using acupuncture now to start strengthening your immune system, your body will be in much better shape to reduce production of the histamines that cause you so much discomfort and resist whatever symptoms do materialise.

Eat and drink well to support your acupuncture treatments

By choosing healthier options and actively getting more vitamins and nutrients, you’ll be adding to the positive work acupuncture is doing to help make hay fever a much less unpleasant experience in 2021.

Green tea, orange juice, honey, garlic, onion and fermented foods like sauerkraut or Kefir – known as healthy gut flora – are great ways to get more protective goodness into your system!

If you’d like to know more about how acupuncture can help you to fight the symptoms of hay fever this spring and summer, please do get in touch with us to find out more. We’d love to see you in the clinic and be part of your wellness journey.