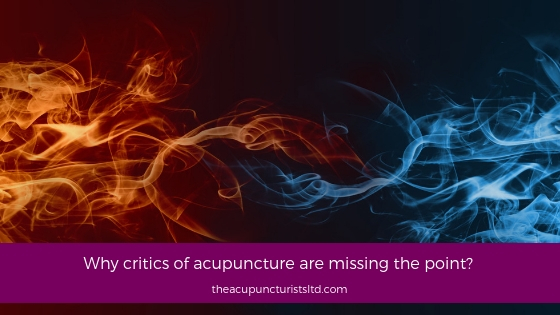 Why critics of acupuncture are missing the point?

There’s been all sorts of hoo-hah in the media over the last few weeks about whether doctors should continue to recommend acupuncture for pain management, largely sparked by a debate between a leading advocate of the treatment from the British Medical Journal and two prominent critics.

I’ve talked a lot in the last few months about how acupuncture helps deal with both occasional and persistent, chronic pain and I don’t intend to rehash the arguments here – this is where you can read the articles in full if you want to know my view.

The fact is, all holistic and alternative treatments draw their critics, and the only relevant issue is whether their arguments are sound. My view is that most people who question the effectiveness of acupuncture are missing the point.

I’ll deal with the evidence shortly, but let’s get the emotional, subjective stuff out of the way, first.

My journey with acupuncture has been a very personal one. I’ve seen at close hand how acupuncture has freed people very close to me from physical, emotional and psychological pain. So much so that it inspired me to change the course of my life and train to help others in exactly the same way.

I have seen people come to my clinic in so much pain and discomfort that they can barely think straight – and seen them leave, after a programme of treatment – with their pain either gone or significantly reduced.

I have treated people whose opinion of themselves has been so low that they can’t see through the mental fog enough to even raise a smile – and seen them leave with improved self-esteem and a clear path to happier times.

Many come back for regular sessions with me because they understand and believe in the whole-body benefits of this remarkable Ancient Chinese treatment.

Critics – inside and outside the medical community – would probably describe what I’ve just said as subjective evidence.

Clinically-speaking, that’s as may be; but it’s evidence I’ve seen with my own eyes and evidence that’s been validated by all those patients who return to continue their acupuncture well beyond the completion of treatment for their initial problem.

Here’s the first fact for you: acupuncture doesn’t work and/or isn’t right for everyone, and anyone who tells you it does is being more than just economical with the truth. Just as cortisone injections, anti-inflammatories, antibiotics and all manner of other clinically-proven medical treatments don’t work for everyone.

One of the popular arguments against acupuncture is that it’s ‘just a placebo’. Let’s ignore for a moment whether that’s accurate or not and just examine the implication and inference of it.

To be clear on definition, for the purposes of this article I’m defining it as a substance or formula which contains no active ingredient designed to affect health one way or the other – a sugar pill is a good example. Often, it’s used in blind trial (where participants don’t know if they’re receiving the drug or the placebo) to assess or test the effectiveness of a drug.

In some cases, the placebo will have no effect but the drug will. Or, more simply, taking the drug works, not taking it doesn’t.

In many cases, though, the placebo does have an improving effect on symptoms, even though there is no pharmaceutical reason for that to be the case. This is known as the ‘placebo effect’.

And there is also well-publicised evidence that even when the patient knows they’re receiving the placebo, the placebo effect can have a positive impact in the treatment and management of specific conditions that include, among other things, depression, pain, sleep disorders, gastric conditions and menopausal symptoms.

So, even if we are to accept acupuncture is just a placebo – which I don’t – it is still an effective treatment for some people. Use of the word ‘just’ – as in ‘just a placebo – seeks to imply ineffectiveness, which clinical evidence shows is simply wrong.

Until the project came to an end in 2016, the BMJ defined the measure of efficacy of all conventional clinical treatments, based on a review of its own literature, as follows:

In plain language, what that means is that just 11% of all conventional medical treatments are proven to be effective. The BMJ could not judge the effectiveness or otherwise of half of them.

At worst then, and only for some conditions, acupuncture can be said to be no more or less effective than 50% of the conventional clinical treatments that critics of acupuncture would be inclined to support.

Here’s another fact: there is no evidence at all anywhere to suggest that acupuncture is harmful in any way – not that informed critics of the treatment would claim that.

And one final fact for you: NICE, the National Institute for Health and Care Excellence that forms NHS policy on healthcare strategies, continues to actively recommend acupuncture as a complementary treatment for a number of conditions that include chronic tension-type headaches and migraines.

And although most acupuncture is not available on the NHS, many GPs are now convinced by its benefits and continue to recommend it to patients for the treatment of a range of physical and mental health conditions.

As with many other things in life, the evidence against the effectiveness of acupuncture is a very long way from conclusive, which means the only way most people can find out if it’s right for them is to research it for themselves.

If you’re among those who’re uncertain about whether acupuncture is for them, why not get in touch and talk to us about what the treatment involves and the potential benefits so you can come to your own view?