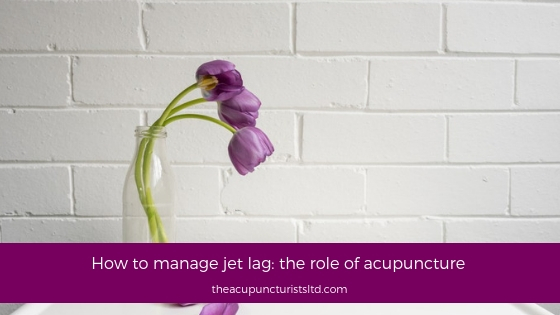 How to manage jet lag: the role of acupuncture

In a couple of months’ time we’ll be celebrating the 500th anniversary of the start of Ferdinand Magellan’s voyage around the world – a journey that took three years and a month. Jet lag wasn’t exactly a consideration for travellers back then.

When the last of the fleet of ships that started the journey returned to Spain in September 1522, Magellan himself wasn’t among the passengers, having been mortally wounded by a poison arrow whilst leading in a Christian crusade in the Philippines.

Magellan’s journey today takes a little under 53 hours and involves crossing 24 time zones and two datelines in a little over two days.

If man ever manages to build a commercial airliner with the range to do the trip non-stop, retracing Magellan’s route will take fractionally over 33 hours.

Even at 53 hours, it’s not difficult to understand why jet lag is such a big issue these days (and why treatments like acupuncture are popular ways of dealing with it).

Back in the Fifties, when air travel was only within reach of the wealthy, jet lag was a faintly exotic notion – to have the opportunity to suffer with it was distinctly aspirational! But that was then, when it was common to have just a single daily flight between London and New York.

These days there are 37.4 million flights a year around the world – more than 100,000 every day – carrying 4.1 billion passengers. The world has become smaller, air travel more affordable … and in turn, jet lag has become an epidemic. Luckily, it’s one that acupuncture is well-placed to treat.

With business increasingly being conducted internationally, business travel now affects substantially more people than it did even ten years ago. Similarly, people are also travelling further and further for leisure.

In very simple terms, jet lag is the disruption to our internal body clocks caused by forcing the body to adapt to sudden changes in routine.

Let’s say you’re going to Tokyo, which is 9 hours ahead of GMT. Your 11-hour flight leaves at 10am. You arrive in Tokyo at 9pm GMT, but it’s now 6am local time and the day is just beginning.

Your choice is either to tough out the day, knowing you’ll be on your knees by the time you crawl into bed … or you sleep for three or four hours (if you can) in the hope of making it to bed with your sanity intact.

Either way, you’re not going to be in great shape. And then you have to do it all over again on the way back.

Acupuncture works so well as an antidote to jet lag because it is built on understanding how energy is disrupted and how to rebalance it.

Our body clocks are measured through what are known as circadian rhythms, and it’s these rhythms – present in all living organisms from humans to plant life – that give us balance. Although circadian rhythms are generated biologically, they’re also informed by external clues – like sunlight and temperature, which is why the body gets confused when it thinks it’s midnight yet the sun is shining and it’s 24 degrees.

Central to the treatment of jet lag is the horary cycle. Qi, our life energy, is constantly present in each of the body’s 12 meridians through the day, but the horary cycle shows there is a 2-hour period in each meridian where our Qi is at its most intense, and a 2-hour period 12 hours later where it is at its weakest. Together, these peaks and troughs in energy intensity make up the body’s natural energy balance.

Knowing this means that as acupuncturists we’re able to specifically target that energy imbalance and normalise it again. While there are some self-help techniques that people can use to relieve the effects of jet lag, the most effective treatment is one performed by a qualified acupuncturist.

I find my treatments work most effectively when the patient comes in for a treatment as soon as possible after they land so that as well as managing the symptoms of jet lag, the treatment also rebalances the whole body.

The result is that the stress of travelling, of having to get to work and of needing to be on top form is alleviated – leaving patients not just jet lag free but also focused and, energised.

If you travel for work or you’re planning a long trip where jet lag is going to be an issue, why not get in touch for a confidential chat and see how acupuncture can help you to feel rested and energised when you return?