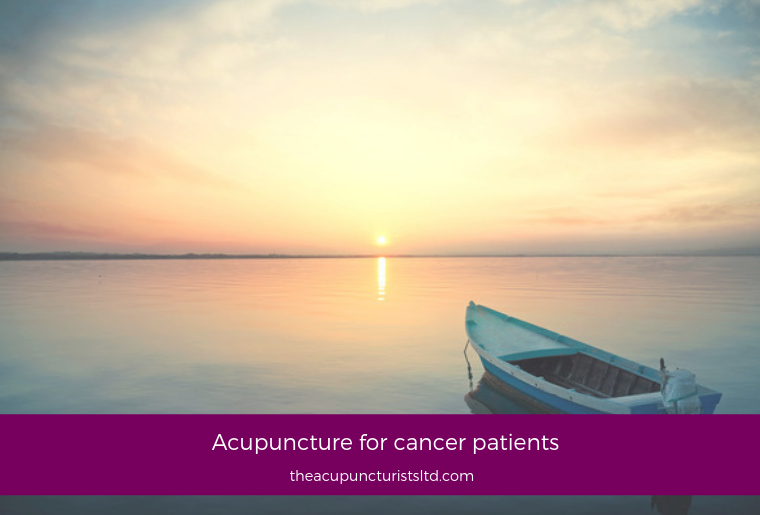 For years now, cancer has been the single biggest cause of premature death in the UK. At the time of writing, it’s estimated that around 2.5 million people in Britain are living with some form of cancer.

In fact, it has fast become as much a part of life as it has of death, thanks largely to the advances in clinical care that have increased the life expectancy of those who have received a cancer diagnosis.

And that’s fantastic of course, because it means more patients living with the disease survive with a better quality of life and more time than would have been the case a generation ago.

But cancer treatment can be punishing and the symptoms of the various forms of the disease and the side effects of some of the treatments commonly used to combat it can take their toll.

Increasingly, organisations involved in supporting people with cancer have turned to complementary medicine to offer patients options to provide relief from symptoms that can be exhausting physically and corrosive emotionally.

And here at The Acupuncturists, we’ve begun to see a rise in interest in our treatments from patients with cancer who want more choice in how they manage and ease the symptoms they’re forced to live with.

Gillian is one of the 2.5 million people who are living with the disease. Ten years ago she was diagnosed with Stage IV stomach cancer.

The road to this point had already been tough. Chemotherapy and radiation therapy following her diagnosis had been nothing short of gruelling, but it paid off and – much to everyone’s joy – she had gone into remission.

Regular annual check-ups came and went and Gillian enjoyed cancer-free years that, not all that long ago, a Stage IV diagnosis would have made almost unthinkable.

Then, last year, her check-up revealed she had bone cancer which was present in her hip bones, spine and shoulders.

More chemo and the unpleasant three-weekly cycle of feeling well and then unwell followed for four to five months. Ten radiation sessions followed that.

Unhappily, her oncology team concluded the combined therapy hadn’t had the effect they had been hoping for and so Gillian – one of the bravest women I’ve ever met – elected to discontinue those treatments.

Not long afterwards she developed symptoms she experiences will be familiar to other patients with bone cancer: bone pain, swelling and tenderness at the affected area that can often lead to fractures, fatigue and unintended weight loss.

As the pain caused by the disease became more debilitating  – she was now suffering pain in her hips, shoulders and spine – she began to look at non-medication alternatives to managing her condition.

Whilst overseas, Gillian decided to try acupuncture to see if that would ease her symptoms and was delighted to discover it was a big help in reducing the discomfort she was experiencing. Back in the UK she set out to find a clinic that could continue what she had started in the Middle East and the USA. and came to our clinic to see how acupuncture might be able to help.

I’m so pleased she came to see us – not just because it’s been a privilege to be able to help her mitigate the effects of the disease she lives with, but also because she has been an inspiration to me for the stoic and resolute way she faces down everything life puts in her path.

It’s a great honour and so rewarding to use my experience and expertise as an acupuncturist to help this amazingly serene lady find relief from the relentlessness of what is a truly horrible illness – not just for those who endure it, but also for those close to them who are often forced to stand by, unable to do very much in a practical sense to help.

Acupuncture offers people with cancer a way to live with a better quality of life, benefiting from an improvement in the unpleasant symptoms of the disease which in turn leads to better emotional wellness that makes dealing with the disease more manageable.

Acupuncture isn’t a cure for cancer and as her acupuncturist my role is not to find a solution for the disease – my job is to use the amazing healing qualities of this ancient therapy to improve quality of life for Gillian and others facing the same or similar challenges.

It’s a role that seems quite small on the scale of the life-limiting reality that Gillian faces each day. But I know, because Gillian tells me, that it’s a role that makes a difference to her.

And in the end, making a difference – to Gillian’s life and the lives of every other patient we treat here at The Acupuncturists – is why I come to work every day.

If you or someone you know is living with cancer and is looking for options for managing their symptoms, why not get in touch and see how acupuncture can help to achieve a better life balance and improved physical and emotional wellbeing?