Auricular acupuncture – or auriculo-acupuncture, as it’s sometimes called – is a branch of acupuncture that focuses on promoting healing throughout the body by focusing on treatment on the ear.

Like all acupuncture, auricular acupuncture adopts the same healing principles that are used in other areas of conventional acupuncture, using super-fine needles to stimulate positive changes in the body’s natural energy flow – or Qi (pronounced ‘chee’ – to tackle a range of wellness issues.

Auricular acupuncture also has its roots in Ancient China and the advent of traditional Chinese medicine, but it became better known in the mid-20th Century thanks to the work of French neurologist Paul Nogier, now known as the father of auriculotherapy.

Ear acupuncture uses needles to alter the flow of Qi and create a better balance between opposing, but complementary, energies that are contained within the internal organs.

When we are unwell, the symptoms will present in a specific part of the body – for example, we may experience back ache or pain in the knee – but the problem itself is often located somewhere else entirely.

The symptoms we have when there’s something wrong are indicative of a blockage in our energy pathways that needs to be resolved, and the process of inserting acupuncture needles into the acupuncture points on the ear is what disrupts internal energy to clear those pathways. 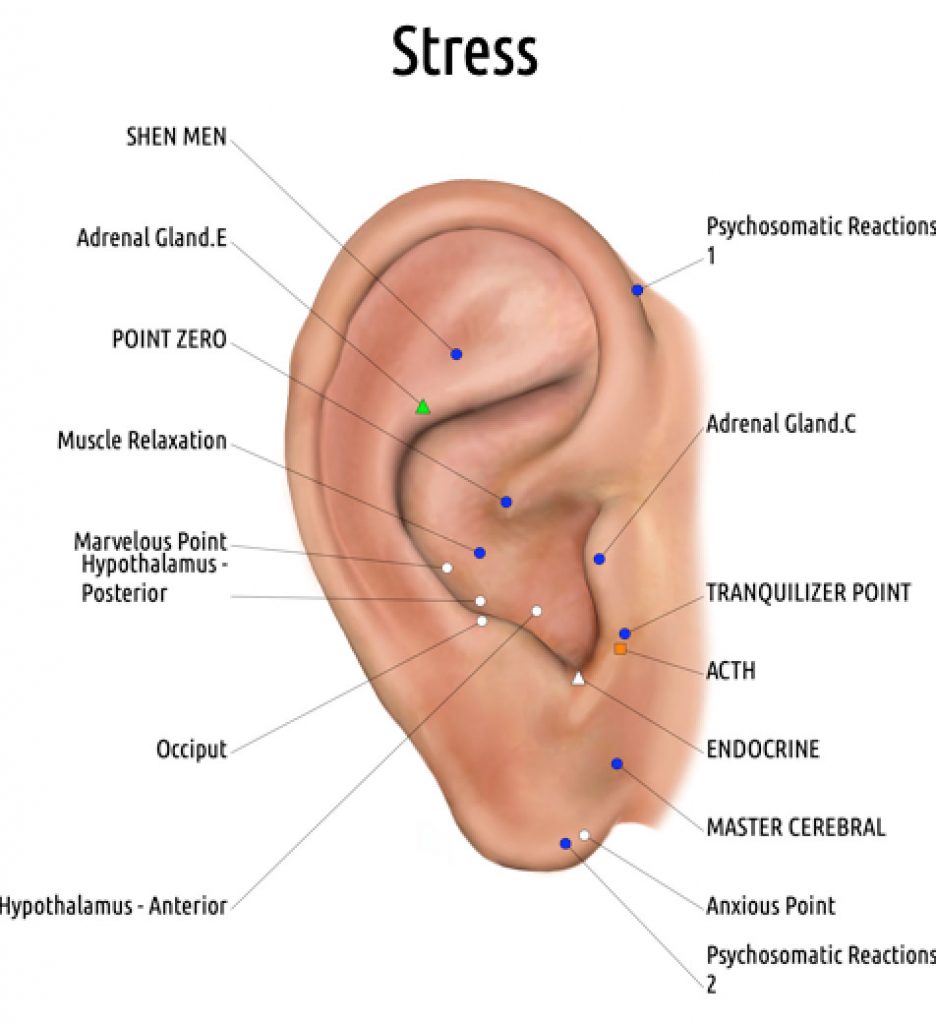 There has been research to show that auricular acupuncture can be particularly effective in improving heart health. Scientists in China and Austria discovered that the treatment led to better heart rate variability, which determines how well the body regulates intervals between heartbeats – itself an indicator of general heart health.

Low HRV is often found in patients who have conditions that include congenital heart failure, diabetes and post-traumatic stress disorder.

But it’s not just physical wellness that ear acupuncture can promote. The treatment is also sometimes used for to improve emotional and mental wellbeing, relieving stress, promoting better sleep, assisting with alcohol or tobacco dependency and weight loss. 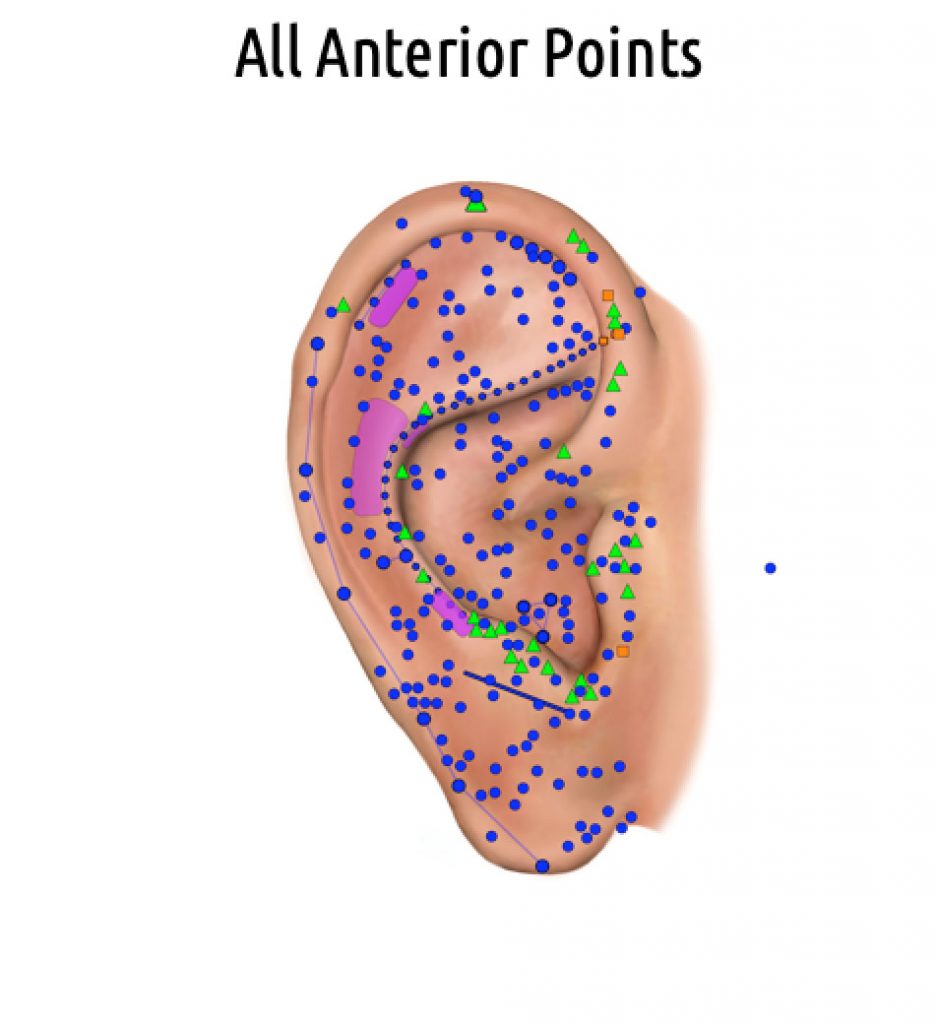 Ear acupuncture is really effective in the treatment of a number of conditions, including:

Much like general acupuncture, ear acupuncture traditionally involved the insertion of superfine needles into the ear. However, that can be quite painful so instead we carry out auricular acupuncture using a small device that emits a tiny charge to replicate the needling process.

This electro-acupuncture alternative to needling is completely painless – so much so that we also use it when treating children.

Your Health in Safe Hands

My daughter has been suffering from hay fever for a very long time and we’ve tried many different treatments which didn’t help but Archna has achieved amazing results with just few sessions only. She is very professional and trustworthy lady and I cannot thank her enough for everything she did for my daughter. Thank you

Archna has treated me for menopausal symptoms, for shoulder pain and for stress. She is an excellent acupuncturist, highly professional and a warm and caring human being. Having been sceptical at the beginning, I realised quickly that Archna’s treatments result in real improvements and alleviation of symptoms. I have total confidence in Archna and recommend her unreservedly.

Archna is amazing. I’ve found her treatments incredibly effective and she is super knowledgeable and caring. She is also very much at the forefront of her field and has a wide variety of tools that she brings to her clients. I love working with her and have now come to her for several years. I have worked with other top acupuncturists in London and SF and consider her among the very best!

I can’t recommend Archna highly enough. It’s such a personal experience receiving treatment from her, every time I go I always leave feeling more balanced, calm and centred. I’m also positive that seeing her for the past two years played a part in helping me get pregnant and definitely helped me during pregnancy with my sciatica. She has recently helped me so much with upper back and neck tension and with my hayfever, it pretty much disappears after I see her. She is also one of the warmest, kindest people I’ve ever met.

I have been seeing Archna since 2017, for injuries, shoulder, neck and back pains and overall health and maintenance. She is very caring and professional toward my treatment, it was great we found her for my acupuncture needs in London. I would recommend Archna for anyone seeking acupuncture treatment. Thank you!

Archna Patel is a truly talented and professional acupuncturist. She has treated me successfully for physical issues (foot and back injuries), and also deeper emotional issues (stress, anxiety). The Acupuncturists clinic location near Green Park is super convenient and easy to find. I can’t recommend Archna highly enough and only wish I could give her more than 5 stars.

“Archna is the most professional, knowledgeable and caring acupuncturist I have seen so far. I will get treated by no one else in the future. Archna not only has over 20 years of acupuncture experience, but in addition she is the only practitioner in her field who I have met, who takes a holistic and much more thorough approach for treating her patients. Archna is efficient, to the point, and extremely skilled. I have recommended Archna to several friends, who are all as happy as I am. I cannot recommend Archna enough and wish I had found her earlier! Thank you Archna!”

“Sitting in the office all day and working without much movement during the week, my neck and back have bothered me for months. I was recommended accupuncture with Archna and after initial skepticism of needles and acupuncture in general, I made an appointment with Archna. My experience was excellent and she has relieved my of my aches, whether in neck, head, back, hips etc. I am a regular with Archna now and very happy! Highly recommend her!”

“I went to Archna initially with a very painful bursitis which couldn’t be treated with physiotherapy apart from steroid injections. She managed to treat my shoulder in a few sessions and I started to feel so much better. What I love about Archna is that she is very professional and she explains exactly what she is doing. She has an amazingly calm energy which helps you relax into the treatment and the session. I am a regular client now as she has helped me with many other issues from digestive issues to tension and even emotional imbalance. I look forward to my sessions as I leave feeling so relaxed and very light which are a result of the acupuncture but also Archna’s magical touch and energy.”

“I have really enjoyed my experience going to Archna I was hesitant at first having never tried accupuncture before but have found it to be a very effective compliment to other treatments. Archna has treated my for stress, lower back pain and allergies. I was surprised how effective acupuncture can be and what a wonderful practioner Archna is. The location is very convienent I can go right after work.”

I couldn’t recommend Archna highly enough! I’ve been seeing her for over a year now – for various reasons – including digestive issues and addiction. Archna is the warmest, most caring practitioner I’ve ever had the pleasure of knowing. She makes you feel completely at ease in the treatment and with her many years of experience, always knows just what to do. She is an integral part to my recovery and I feel blessed to have her in my life.

I have been seeing Archna for six months, after struggling with anxiety, stress and difficulties with conception. I was very nervous about approaching acupuncture, but Archna put me at ease within 2 minutes of meeting her. Her calm and reassuring manner helped me to relax, and she went out of her way to make sure that I was always comfortable and felt secure with the treatment options. My appointments with Archna are now little oases of quiet and calm; her treatments dropped my anxiety levels significantly, and I fell pregnant after just a month of seeing her! I truly believe this was a result of Archna’s healing and nurturing treatments, as well as her warm and caring presence. Despite reaching my goal of pregnancy, I am still seeing Archna to calm, soothe and invigorate me during this time, she is the best – thank you Archna.

I’m really well looked after by Archna and feel my needs are being treated with care on a weekly basis. Would highly recommend to anyone!

I went to see Archna after being highly recommended by my sister. I found Archna’s caring and lovely nature made me feel completely comfortable, and I was amazed with the results I got after a treatment with her. As a mum of two my back had taken a battering along with my energy, I’m writing this now feeling like a new woman! So I now join my sister in highly recommending her to everyone!

Archna is an absolutely amazing and gifted acupuncturist. She has treated me for a variety of back, neck and skin conditions, and the results and healing effects on the body have been nothing short of extraordinary. I really like her energy, integrity and commitment to the work that she is doing and would strongly recommend her to anyone seeking a natural treatment to any physical or emotional issue.

“My experience at the Acupuncturists was wonderful, every time since I have started seeing Archna over two years ago. She is a fantastic practitioner, really knowledgeable and very focused on providing the best treatment possible. She is very professional and knows how to adjust each treatment so that when you leave you feel much better then when you arrived. She has helped me with stress, back pain, shoulder tension, digestive issues and common cold relief. I would highly recommend Archna to anyone looking to receive treatment.”

I have been consulting Archna for around 15 years. Her work never ceases to astonish me, and now I find there is no ailment that I would not ask her about. Most entrancing though, is her deep-sourced integrity and soulfulness. I have recommended her work to most of my friends and family and will continue to do so.